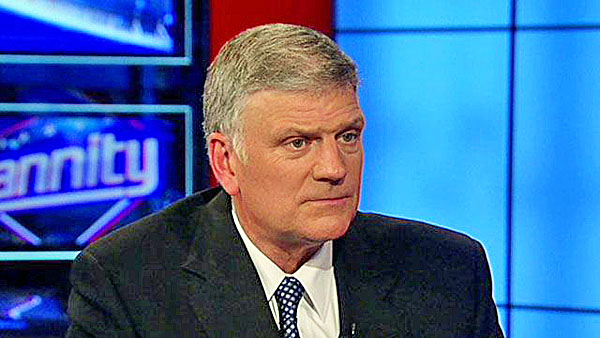 I created this Blog as a way to fight for my Lord and my nation. This past year has been very tough on my faith. I almost lost it. Watching thousands of Christians supporting a man who is the polar opposite of Christ while saying that we are a Christian nation sickened me and reminded me why I was a Christianity hating agnostic.

I have made YouTube videos based on his father’s book. I have written blogs pleading with him to do the right thing. To give up his political yolk and do the right thing. To speak out against our president’s behavior and policies. Now I don’t think Franklin Graham is a bad man, I just believe he is  worldly one that let fear, hatred, and politics lead him astray.  I do believe that if he stands up with a Bible in his hands, he could start a third great awakening

I understand he supported Trump because he feared and hated Clinton. Clinton is no longer a threat but he is still yolked with this man who is a lover of himself, a lover of money, boastful, proud, abusive, ….ungrateful, unholy, 3 without love, unforgiving, slanderous, without self-control, brutal, not lovers of the good, 4 treacherous, rash, conceited, a lover of pleasure rather than a lover of God.

19 The acts of the flesh are obvious: sexual immorality, impurity and debauchery; his bragging about chasing after a married man’s wife should have disqualified him from the eyes of any born again voter. If Trump was running as a democrat, this would have been a non starter 20 idolatry and witchcraft; I am not accusing Trump of being a witch. But he is an idolater. Yes he doesn’t worship Molach, Asarte, Zeus, Odin, or Appolo but he does worship money, and worst of all he has made himself his own idol.  hatred,  this is a man who hates his enemies with a passion. discord, jealousy,  this man is obsessed with ratings and with crowds. He is jealous of anyone who gets more attention than him fits of rage,  his tweets show his fits of rage. His attack on Mika’s facelift was shallow and mean spirited like all of his tweets selfish ambition, it is all about him, it isn’t about this country. It isn’t about who he serves. It is only about himself dissensions, factions 21 and envy; drunkenness, orgies, I don’t think he drinks and I have no knowledge of any orgies and the like. I warn you, as I did before, that those who live like this will not inherit the kingdom of God.

22 But the fruit of the Spirit is love, I have never seen him show love for his fellow man joy, peace,  this is a man who says we should kill the families of suspected terrorists and asks ” if we have nukes, why don’t we use them” hardly a peacemaker forbearance, this is one of the fruit that I am weakest in. This man has no patience. He wants it now and he wants it his way kindness,  there is no kindness in his budget. His health care bill that he himself declared was mean will take thousands off of health coverage. goodness, faithfulness,  if you were a faithful follower of Christ, you would follow His teachings but Trump does and supports everything that Jesus spoke against. If you have doubt read Matthew 5-7 and Luke 6 23 gentleness and self-control.  His tweets show that he has no self control. If he feels slighted he will attack without thinking and without mercy. I worry about a man like this with an army at his back. Against such things there is no law. 24 Those who belong to Christ Jesus have crucified the flesh with its passions and desires. 25 Since we live by the Spirit, let us keep in step with the Spirit. 26 Let us not become conceited, provoking and envying each other. I am not doing this to provoke. I am just a simple sinner saved by Grace. I bought the liberal lie that Christianity is a hypocritical faith that is a danger. I no longer believe that but Graham’s support of Trump does add validity to this accusation.

So I sent these two checks. I called the Billy Graham Evangelical Association and reminded them what I wrote in this letter. That if Franklin Graham has no intentions of doing this, I want the checks ripped up. They went through the system. So I will pray and wait. If Graham does not stand up to our bully in chief. If he does not stand up for the Bible. I will demand my money back.

So please. I donated this money because I want to help spread the Gospel. That we have a God who loved us. Who died for our sins so we can be transformed and have eternal life. What is more important politics or eternal life.

I know that this will be hard. Many people will hate Franklin Graham. They will curse his name. Donations will dry up. But God will take care of Him. All he needs to do is be Brave and have faith. I do.

God Bless you Franklin Graham. And who knows maybe God will use you to bring not only atheists to the faith by doing this but also Donald Trump.

View all posts by 2timothytrump

This is a text widget, which allows you to add text or HTML to your sidebar. You can use them to display text, links, images, HTML, or a combination of these. Edit them in the Widget section of the Customizer.
Loading Comments...
Comment
×
%d bloggers like this: